Well we finally have the total raised for the Maggie’s Run – £1100. Nae bad considering only 50 or so folk came along. Charlie’s going to organise a presentation to Maggie’s soon. Thanks to all who came along on the day.

The next Chippy Run will be Tuesday 26th June, probably to Arbroath and the Bell Rock chippie. See what the weather does! Leave No31 / Wellmeadow at 7pm sharp .

Hi everyone
We decided last night that the next Chippy Run, next Tuesday night the 29th , will be to Cromar’s in St Andrews. They are Scotland’s best chippie again for 2018 so worth a go. They have a restaurant so we can get a  seat and they’re open till 10pm.  Leave No31 at 7 for Dundee via Coupar Angus, Tullybaccart and over the Tay Bridge.
Let me know if you’re going to meet us somewhere on the way so we know to look out for you. As we’ll be back late I don’t think there’ll be anyone going to No31 after the run.
Hope you can make it. Six of us had a good run down to Errol and Glencarse last night over some fine wee back roads. Some pics from the start at the Maggie’s Run below –  Thanks to Alan for taking them. 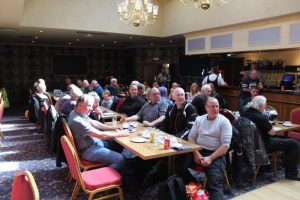 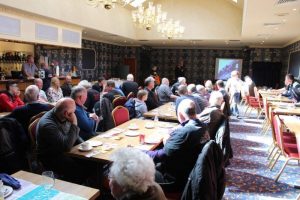 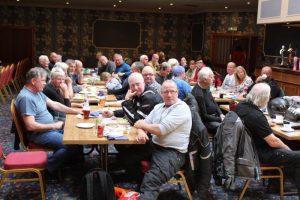 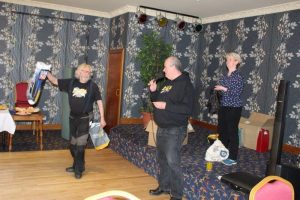 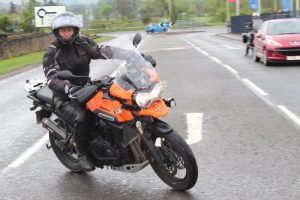 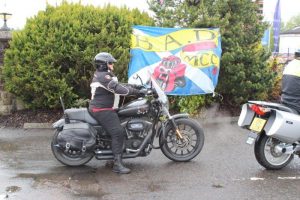 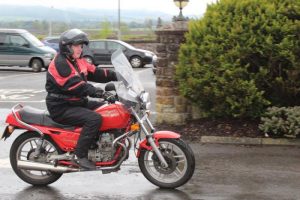 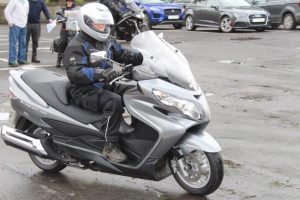 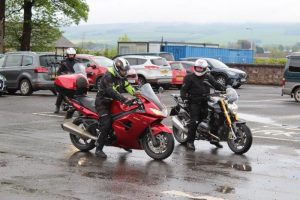 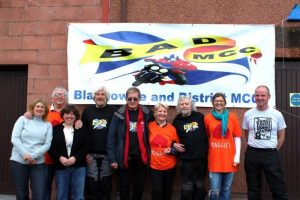 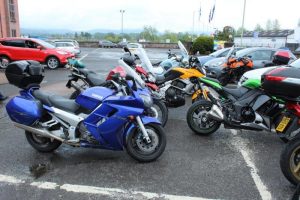 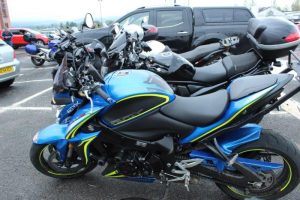 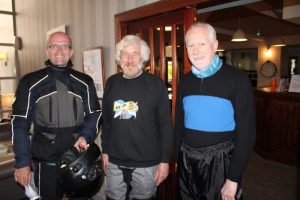 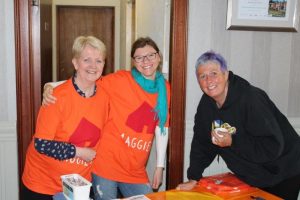 Thanks to all of you who turned up at the Red House on a wet morning, there were about 50 bikes in all went on the run. All were rewarded with an improving day right from the off, with the sun breaking through before lunch. Those who stopped at Tummel Bridge, like I did, had a good lunch sitting out on the terrace by the river in warm sunshine after enjoying superb views across Loch Tummel to Schiehallion on the way.

The low numbers at the end meant nearly everyone won something, and there was enough food to feed twice the number there so no-one went away hungry. We haven’t done the sums yet as to how much was raised, but obviously it’ll be well down on previous years.

Thanks to all who helped and to the Red House for providing the venue once again. 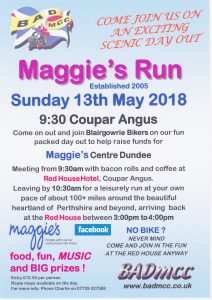 Yes it’s all sorted now so let’s hope the weather’s a bit warmer! New route this year so it’ll be a grand surprise for you all. All money raised goes to Maggie’s Centre Dundee so come along and ask all your mates too.

Remember the AGM will be at No31 this coming week, on Tuesday 3rd at 8.30pm. Lots to discuss and plans to make…….you don’t have to be a  member to come along to the AGM or any Tuesday night meet, now EVERY Tuesday in this wonderful daylight we have. Our Tuesday night runs are back on now too, just turn up at 31 at before 7pm and be ready to go at 7. Arctic ,snowy and frosty nights excepted…..

Bike on the road now? I hope so , don’t delay and get out on it! The more of us on the road the more likely other drivers will notice us!

Watch those potholes too they’re likely to give your wheel a nasty crack if you hit a  deep one., and remember all the tar that was in that hole is now scattered all over the road just waiting for you……..

Our  BURNS NICHT at the start of February was another great night, and we raised £160 for Maggie’s Centre. Thanks to Robbie the piper, Harry for the address to the beast, and Scott and all the musicians for playing all night. Plus everyone who donated raffle prizes. Thanks.

The Club AGM will be Tuesday April 3rd at No31, so come along and have your say. More later on this.

The MAGGIE’S RUN this year will be on Sunday May 13th, starting and finishing at the Red House Hotel, Coupar Angus. A fantastic new route for this year is likely, so watch for more news later!

This year the BAD MCC is 25 years old, so we’re having  a 25th Anniversary Party!  We have the Gig in Blair booked for Saturday 29th September, with Independence, an excellent band, playing. Not to be missed – but you’ll need a  ticket to get in.

Next Club night is 6th March, then the 20th. Once we’re into April I hope you’ll all have your bikes back on the road and be ready to rock’n’roll! 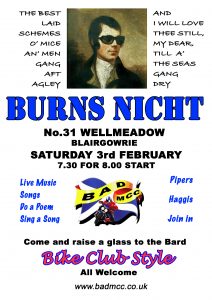 Yes, all welcome and we’ll be grateful for donations on the night towards our chosen charity, Maggie’s Centre, Dundee.

And a Happy New Year! 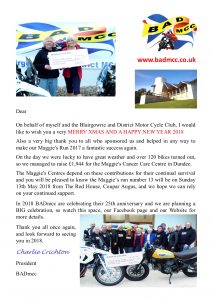 Very best wishes to everyone from all at the BADMcc. May 2018 bring loads of sheds for keeping stuff in. Bike Stuff….. Only Bike Stuff.

This coming Tuesday, 21st, is the last Club night at No31 before Christmas, so come along if you can manage.
The Club meal at The Old Cross was a great success, with over 30 folk there in the end . Food was good and service excellent, so we didn’t have any complaints and with a live band (well a  couple of guys) there was a good atmosphere till closing time. One of our best-ever Christmas nights out I reckon!
Star of the night was Jackie, who won the £50 meal voucher, so she can make the most of it sometime soon I hope. Thanks also to Pam for the table decorations etc and Helen for doing  the reminders and place tags. We actually managed to collect the right money in the end so thanks also to Bruce and Hazel for that.  And to El Prez Charlie for his excellent words !
Can I wish everyone a good Christmas and an excellent Hogmanay and thanks for supporting the BAD MCC this year.
First Club night of 2018 will be Tuesday 9th January, then the 23rd, just before our famous Burns Nicht on Saturday 3rd Feb so put it in your diary!
« Previous 1 2 3 4 5 … 9 Next »