We’re almost there for our Burns Nicht folks! We’ve got a better line up of music, songs and entertainment than ever before so don’t miss it!
7.30 for 8 this Saturday , 6th, and don’t be late if you want to get in! Charlie’s got a fair wheech o haggis, neeps and tatties organised (but more peelers welcome- just let him know!) but if you’re late you might go hungry.

Next club night will be 16th Feb

Yes, we’re all set for a  grand nicht with music, songs, haggis and pipers! Don’t miss it! 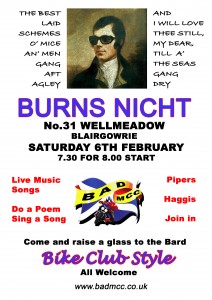 A Guid New Year to all

First meeting in January will be the 5th – hope to see folk then. Then the 19th.

Have a  good one tonight a’body

Just to let you all know the quiz was won by Bruce, with a  clear two point lead over me, with George and Derek tying for third, after some good questions . A good laugh and worth turning out for, so if you weren’t there you missed a  good night. Thanks to George F for setting the questions too!

Last chance for the Christmas meal now , on Friday 4th Dec, so looking forward to a good feed and good craic

Yes George’s promised quiz on biking stuff in general is going to be on the 17th Nov – in two weeks. We’ll see if the esteemed chairman can bamboozle us – or if someone’s a genius….  starting at 9pm and it’s not a  marathon I ‘m told so you won’t miss your beauty sleep. It’s a quiz you’re supposed to do on your own, and George’ll have all the pencils and paper you need  . So come along and have a go. PRIZES!!! well maybe one….

We’re going to have a Christmas night out too and Friday the 4th of December’s been mentioned as a possible date for going out for a meal in Blair like last year, only at the Dalmore this time as the meal deal’s better there than the Royal. Much later than that and it gets busy everywhere with Christmas do’s. A bevvy in Dundee was also suggested, not necessarily on the 4th, so let any of the Committee know what you prefer – soon please! or both…      the Club won’t fund either of these as we agreed last year, you pay your own way. We’ll need to book something soon so don’t hang about.

There will be a Prize Draw at the main Christmas  event, whatever that is, with the Club putting up a £50 first prize and maybe a  couple of bottles for second / third . Every one of our 34 paid-up members will be put in the draw so you’ll have a  1 in 34 chance of winning! A whole lot better than the Lottery!

OOOps sorry folks, as the clocks change this coming Saturday/Sunday, tonight will be our last Tuesday night meeting till the first Tuesday in November, the 3rd.

Yes it’s not going to be long before the clocks change so our Tuesday night meetings will be changing too. We’ll only be meeting twice a month  from the start of November, on the first and third Tuesdays of each month. So the next meetings at no31 will be 20th and 27th October, then the 3rd and 17th of November, then 1st and 15th December.

We’ll be having a  quiz night in November so watch out for details!

Falling off motorbikes – a beginner’s guide

Well not exactly, and NO you don’t want to do that,- but the title of Geoff Hill’s talk and slideshow on Saturday at the BOOKMARK festival!

We were glad to see 40 or so bikers or would-be bikers at Geoff ‘s slide show, based on his bike trips through the Americas, Australia and round the World. It was great to meet Geoff (and his wife Cate) and hear such a light-hearted and witty talk about his travels on Royal Enfields ,Triumphs, and BMWs, delivered in Geoff’s best Belfastian voice! As he towered over everyone in the room microphones were redundant! Despite some pretty scary situations on the road, involving banditry, breakdowns, and the promised falling off bikes story, Geoff’s assertion that 99.999% of everybody he met are good folk and help bikers in trouble was re-assuring for any would-be travellers. He still has plans for more adventures on bikes despite having a full-time job,  so we look forward to reading his next book – and the next – and the next.
The BADMCC were keen to support BOOKMARK and thought a slightly different subject like motorbikes would interest a wider audience, and maybe encourage a few folk to try one sometime (on a warm sunny day of course!) Geoff himself admitted to only learning to ride a bike at 40 so it’s never too late….Scotland is a  great place for bikes with miles of empty roads and fantastic scenery so you don’t have to go halfway round the world to find adventures, just head north to Braemar and over the Lecht to Inverness, Thurso and Ullapoool for a start! (As seven of the BADMCC did last weekend) 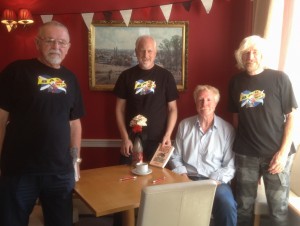 We try to support local charities when we can, and BOOKMARK was a great chance to help  bring someone different to the event.   It was good to hear some of the other speakers too and see something different happening in Blair so we’d like to thank all the BOOKMARK organisers and volunteers too.
As Geoff said – Ride safe and stay shiny side up !

Thurso and back again….

A good weekend was had by all, although a bit showery on the way up over the Lecht and again for the last 20 miles to Thurso. The Royal Hotel was a  fine place to stay as long as you could remember your way about….a labyrinth indeed. For £35 a night it was fine and we all could stay in the same place. Saturday was dry and the run to Ullapool was good, although one of us stopped at Durness as his back tyre was knackered. (should have changed it before we left….) Some beach walks were had instead, more relaxing than a  blast for 200 miles. A good curry to finish the day and of course a few beers to wash it down, and we even got a  complimentary round from the proprietors!

A good run home on sunday in superb weather, but some delays at Tomintoul on the way back thanks to a cycle event closing the Lecht. 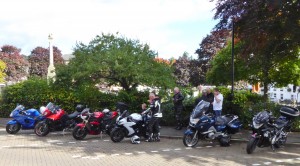 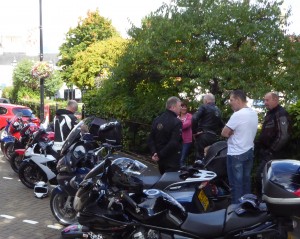 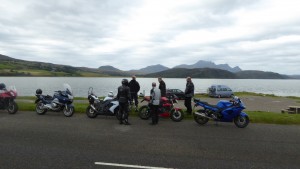 Yes we’re almost ready to go! Meet in the Wellmeadow at 12.00 on Friday 25th for the run up to Thurso via Glenshee and the Lecht. if you haven’t booked into the Royal Hotel in Thurso yet you’d better sort yourself out, or camp. Saturday run round to Ullapool and back, then home on Sunday.

Then next is the BOOKMARK weekend when Geoff Hill will be giving his talk on Saturday 3rd October, so get your tickets if you haven’t done so already. It’ll be interesting , tales of his trips in Australia, and round the world, with slides. Talk starts 11.45am and admission is £6

Tickets from Bookmarkblair.com or the Library in Blair, or on the door.